Adopted and Pro-Choice: A Reproductive Journey 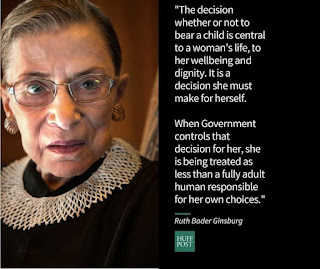 It was January of 1987 and I had just turned 21.  My long-term relationship was over and I stopped taking the pill.  Not long after, I found myself hanging over the toilet at work throwing up.  A co-worker who heard me helpfully suggested, “You better take a pregnancy test.”
My roommate and I watched as the red line of the pregnancy test turned dark. The fear and disapproval of my parents loomed large and thoughts of birth, parenting or adoption not anywhere on my radar. With adrenaline fueled urgency, I called the Woman’s Clinic and scheduled the abortion right away.

I was fortunate.  I had a job and a supportive partner.  We could afford to pay for the procedure out of pocket.  I was not forced into an unwanted ultrasound or a time-delay.  Roe v. Wade, Planned Parenthood and several clinics in my area provided options.  I decided to have the procedure done close to home.  This right protected me so when I was ready to have children later, I was still able to. (Abortion is safer than birth).

Some people say their abortions were traumatic.  For me, being pregnant was traumatic, but the actual procedure, referred to as MVA (manual vacuum aspiration) was quick and for the most part, painless.  What was needlessly traumatic were the pro-life picketers that were screaming at my ex-boyfriend and I as we entered and exited the building.

I have never understood why people who are involved in the pro-life movement believe that aggressive tactics will lead women to change their minds.  I think about the guy who drives a beat-up station wagon with pictures of bloody fetuses affixed to the hood, sides and back end of the vehicle. He parks it at the grocery store as if this is a normal thing to do.

In the 1980's, one pro-life extremist followed my friend and I around a department store when he recognized that she was a medical assistant at a local abortion clinic.  We stopped to talk to him in the parking lot and he spewed his rhetoric and handed my friend a book for later reading.  She continued to work at the clinic despite these types of scary interactions. (Here is a former pro-life leader who has rethought his position.)

In the 90's, I briefly volunteered at a pro-life women’s clinic.  The clinic offered free pregnancy tests and financial support to pregnant women.  It was God’s will, according to the script, that all pregnancies should be carried to term.

During our training, we were shown a propaganda film about a late term abortion procedure invented by a doctor in my hometown.  The movie stressed the fetus’ physical pain.  There was no mention of women who died because of childbirth complications or women who had to make agonizing decisions about a fatal condition in the fetus.

I stopped volunteering and moved firmly into the pro-choice camp for good.

After meeting the man I eventually married, I went on to have a full term baby and later, two miscarriages. One of them was during the second trimester.  I delivered a very much wanted but unviable fetus in the same wing other women were delivering live, full-term babies. My husband and I were devastated. We named him Park, after the grandfather I never knew.

When you are adopted, you often get asked, “Aren’t you grateful you weren’t aborted?” by people who usually consider themselves Christian.  The first person who asked me this was my neighbor, a Catholic adoptive parent.  I was in shock that this otherwise kind and friendly man was asking me such a deeply personal and inappropriate question in the church cafeteria.

Many years later I met my birth mother, a staunch pro-life Republican, who upon learning of my pro-choice stance, unkindly shouted that I was conceived during a date-rape and should be grateful I was not aborted.

I believe in the unequivocal right of women to decide when and with whom to have children. And yes, I understand the mind twist this can create because I am adopted.

Each burden you pile on top of women with unexpected pregnancies will create further trauma above and beyond the stress of deciding what to do.

Because of the Supreme Court’s overturing of Rowe v. Wade, women in many states will now be forced to travel to receive a safe and legal abortion.  This means they will be forced to carry a fetus longer than they otherwise would have due to overcrowded clinics, forced waiting periods and a higher financial burden. Women of color and women in poverty will be most affected.

One in four women will have an abortion.  25% of pregnancies will result in miscarriage.  The women affected are your neighbors, co-workers, sisters, mothers, daughters and granddaughters. They are the the only ones who will risk death or disability carrying a pregnancy to term.

Reproductive health decisions belong to the woman and her doctor. Full Stop.

If we don’t pay attention to the erosion of women’s reproductive rights, we will all bear the financial, emotional, and psychological consequences of forced birth.