1.  People assume if you have anything negative to say about adoption, you are anti-adoption. Many people are also still mystified even in the age of open adoption, why we feel any need to search for our roots.

2.  People assume you are an "angry adoptee" or "had a bad experience" if you are involved in the adoptee rights community and are not happy-happy-joy-joy about adoption or do not feel the need to actively advocate for increasing adoptions.

3.  People assume that your life is open to their judgment and examination simply because they are curious about you and why you are adopted.

4.  People associate being adopted with "orphans", "unwanted children" and "almost aborted".  I have lost count of the times I have been mind-blasted with odd assumptions about my personal life by someone who barely knows me, but knows my adoption status.

It's no surprise that adoptees as a class are misunderstood, with the media hype, religion/politics/society waxing and waning on where they stand on adoption, abortion being unfairly mixed into adoption, and the expectation that we remain loyal to adoptive parents' wishes and wants, even as adults. 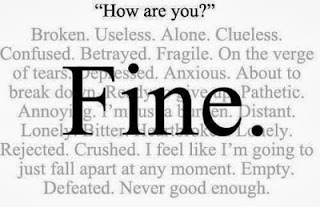 Delayed Grief -- In this interview at Lost Daughters, Corie Skolnick, therapist/author, describes what she learned from adoptees about their delayed grief, in addition to her observations that adoptees are very resilient and creative.

Incohesive sense of self/identity - I find that this lack of knowing and missing narrative of my life is what has affected me the most negatively as I became an adult.  It still negatively affects me to this day.

"Early adulthood is regarded
as the life cycle stage in which people evaluate the
characteristics and values they have inherited from
their families of origin and decide which aspects to
maintain and which to discard (Urdang, 2002).
This can be a unique struggle for an adoptee.
One issue that is thought to interfere with an
adoptee’s development of a coherent sense of self is
the lack of others with similar physical characteristics."
(Lifton, 1979).

Hyper-Independence - Many adoptees I know (myself included) are a party of one.  They are the only ones they know they can count on to do it, say it, fix it and/or deal with it.  We don't like to be vulnerable to ask for help from others and/or we don't want to feel let down when others don't follow through/leave/disappoint us.

Co-Dependent - putting others feelings before  oneself (and not taking care of oneself properly) is a full time job for many adoptees.  This can show up as people-pleasing.

My first therapist identified co-dependence in me during my very first therapy appointment.  I had never heard of it and read the book, "Co-Dependent No More" by Melody Beattie -- a life-changing book for me.  My theory on why many adoptees are co-dependent is this:

Many of us were placed in our families to make our adoptive parents' dreams of having a family come true.  If our parents did not fully accept us for the people we were (and not the people they wished us to be), it resulted in co-dependence.  Obviously, if our parents had substance abuse issues or other addictions, these dynamics could also lead to co-dependence; however, I believe the simple act of being adopted, can put one at risk for co-dependence. 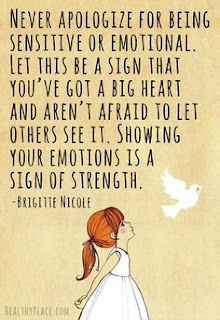 Sensitivity - Sensitive to rejection, sensitive to other people's feelings because we know how it feels to be on the outside.  We may be the first to befriend the picked-on or left out person, because we understand how it feels to be on the outside. Reunion sometimes increases these feelings as many adoptees recognize we weren't wholly part of the adoptive family and now we are also on the outside of the birth family as well.  Of course, some adoptees fit in famously with one or both of their families; however, it's unusual to hear an adoptee say they feel fully complete in both families.

Constant Expectation of Rejection - One family left already -- what is stopping another one from leaving?

"I think we Adoptees have trouble making
and sustaining relationships. We share a
vulnerability to the stresses and strains of
everyday interactions, have real difficulty
forming ties and connections. We need
security and dependency, but try to escape
from it. We seem to need freedom. We
don’t trust people." (Lifton, 1979, p. 65)

Hyper-vigilance - Wondering when the other shoe is going to drop
. Is the sky falling because something good is happening in my life?  Hyper-vigilance is common in survivors of trauma and make no mistake, when your mother relinquishes you, it is a trauma, plain and simple. Another way it was described by one adoptee is this:  "unfounded sense of impending doom.".  For more on trauma go here.
'
Over-achieving - I need to work harder, be smarter, more successful, more (fill in the blank) in order to be loved.
Separation Anxiety - Fear that when someone leaves, they are never coming back.

Distrust of authorities - I have always distrusted authorities despite being raised by a mother who believed anything an authority said.  When government/religious/social/family groups conspire to keep your entire existence a secret or your true identity is always the elephant in the room, it does something to your faith and trust in anyone who has control over your life.

And others that were shared with me:

*  Not feeling like we fit in with our families or friends

"The confusion that results from an adoptee’s feeling
of “differentness” has been coined “genealogical
bewilderment” and refers not only to a physical dissimilarity
but also to a sense of not being with “one’s
own kind”" (Lifton, 1979, p. 47).

*  Lack of physical connection to family

*  Running away when things get hard

*  Heightened anxiety (but being unaware of anxiety)

*  Feeling as though we have to be grateful for being saved

*  Feeling you could be easily replaced

*  It's better to leave than be left

*  Not sure what to do with their lives

"The quality of the attachment that develops
between the adoptee and the adoptive parents is a
critical factor in the repair of the primary loss."
(Brodzinsky, et. al, 1998; Rosenberg, 1992)


And now for the positive traits of adopted people.  I posed the question, "tell me about the positive things you received from adoption" to the authors of The Adoptee Survival Guide.  Here are some of their responses:

* empathetic, compassionate, will see things through

* sensitive to others' feelings and will play peacemaker

* dislike injustices in the world; protective of others and possessions; competive -- Daryn Watson

* "I know that love is thicker than blood. Blood doesn't make you family.  Therefore, I can love people like family." -- Kara Albano 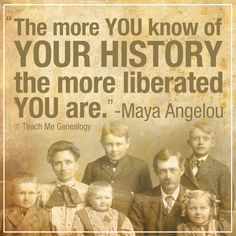 * we don't take relatives or genealogy for granted

* independent, self-reliant and happy to be alone

* take nothing for granted; photo-junkie (documentation!), drive to connect

Paige Adams Strickland wrote a really great blog post called The Benefits of Being an Adoptee.  I urge you to read it and to also buy her memoir for more insight into life as an adoptee.

"It has made me a sympathetic, empathetic pragmatist with overtones of possible optimism. It has made me acutely aware of the fragility and in some senses nonsense of human constructs and the power they exert over people because our need to belong, to fit in, to know our place in context is, an overriding drive no matter our race, colour, creed, sex or religion." -- Lucy Sheen

A pattern I have noticed when speaking with my fellow adoptees is how narcissism (narcissistic parents or just narcissistic thinking) can easily creep into adoption.  In fact, the adoption system is a minefield of narcissistic thinking. What are you talking about, Lynn? Stay with me here. Let's start with a brief definition of narcissism.  I am not going to quote the DSM  here -- we will leave that to the psychologists and social workers.  I am going to talk about narcissism in plain English.  These traits are common in narcissistic people or systems: * lack of accountability, abuse of power and lack of transparency * sense of entitlement * lacking in empathy and ethics * secrecy * magical thinking  * all about the image, not about the truth * making friends with people in high places * lying * corruption/greed *objectifying others for own gain In studying narcissism over the past 20 years, I have noticed many parallels to adoption that it is quite mind-blowing
Read more

I wanted to do a post about "failed" adoption reunions because I hear from many adoptees who are in the same boat as myself. I don't like to view my adoption reunion as a failure. I have had many people (including other adoptees who have not taken the plunge themselves) assume that my reunion was a failure because there were certain outcomes that did not meet my expectations.  I look at my adoption reunion as successful, even though the relationship with my mother could not last. I have no regrets at all about my reunion. I had two decades to think about having a reunion with my mother and deal with all the emotional baggage that comes along with being raised in closed adoption.  At some point, I decided to hell with the outcomes, I was just going for it.  (I got in touch with my inner badass ). On some level I knew that my reunion with my first mother would not be a life-long relationship. Before I flew into Philadelphia, I had carefully prepared a photo album of
Read more