Showing posts from July, 2015
Show all

Positive and Negative Adoption Language: Who is Making the Rules? 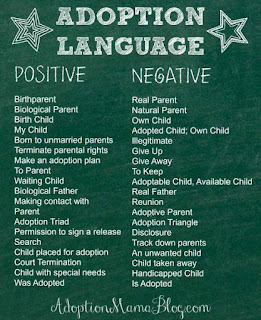 I came across this list on my Facebook feed today, and felt really compelled to write about it.  I will admit that I generally do not read adoptive parent blogs (with one exception being this one) and I also do not take part in adoptee support groups where I am instructed to use or not use specific words such as "birth parent".

In some circles, birth parent  is seen as negative and in others (like this list, for example), suddenly birth parent is positive.  Personally, I find the term birth parent as neutral; however, I will say that the adoption industry uses this term to separate a mother who relinquishes places her child, from a mother who adopts a child.   However, the term, birth parents has long been accepted as a way for adoptees to differentiate which mother they are speaking about at any given time.  I would not necessarily deem it positive, though, and it has always bothered me that there is a separate holiday for birth mothers (the Saturday before Mother's D…
6 comments
Read more 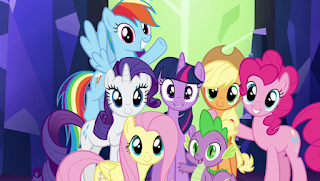 In honor of Trotcon 2015 that was held this past weekend in Columbus, Ohio, my daughter (a HUGE fan of the show) gave me the idea of writing about Spike, the adoptee of the My Little Pony, Friendship is Magic series (created by Lauren Faust).  This is hands-down one of the best series out there teaching about lessons of friendship. The music is top notch as well.

Spike, is a purple and green dragon.  (not to be confused with the purple and green dinosaur) who was raised in Ponyville, not knowing his original parents.  In one scene, Spike is speaking with several of the Ponies.

Spike does not realize at this point he does not act like a "real dragon"  He is seen wearing a pink heart apron.

Rarity replies, "Spike is unique -- he doesn't have to look like other dragons"