Showing posts from January, 2019
Show all

On Being Excluded, Rejected and Feeling Like Ugly Betty 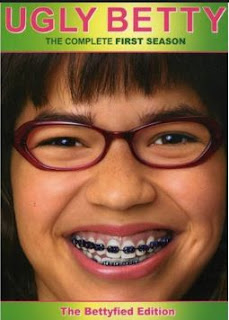 Being excluded happens to us all at one point or another.However, that doesn’t make it any less painful, just because it’s common.
My 14 year-old daughter and I have been watching Ugly Betty on Netflix while hanging out in our house during the Level 2 snow emergency this weekend.
Choosing a show that mom and daughter both approve of is a feat in and of itself.I love the focus on Latin culture in New York City and she approves of the nuanced and well-developed characters.
America Ferrera, who plays Betty-a first generation immigrant- is far from ugly; however, the show is all about family sticking together, being who we are and moving forward with confidence, despite repeated exclusions and rejections.We are already in Season 2 and haven’t lost interest.

The show is a bit of an emotional support for something I recently experienced in my personal life.I learned this week from a source that a close family member will be flying to another state to attend a milestone birthday party that my i…
7 comments
Read more

I am a Living Legacy to the Leader of the Band 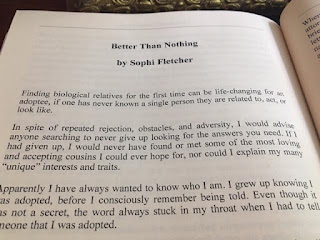 When you grow up in a closed adoption, there can be some unique psychology.One common trait of those of us raised without any knowledge of where we came from is we can sometimes fantasize about our birth parents growing up.  One common fantasy is that one or both of our birth parents are famous. Well, a friend of mine recently discovered she had a famous biological father through second cousin matches in several DNA databases.  Her name is Sophi Richman Fletcher and she has been looking for answers to who her mystery daddy is for many years.We have commiserated together in our searches and I am so pleased for her that she now has answers.Her story was posted in my private Facebook search room and I'm sharing it here with permission:
"Greetings, fellow Who's Lynn's Daddy Searchers and Support Team:  I'm another adoptee who has been searching for the identity of my bio dad for a number of years (after some really false leads/assumptions...enter DNA...) A week ago y…
3 comments
Read more
More posts