Let's clear up some myths about open records for adoptees 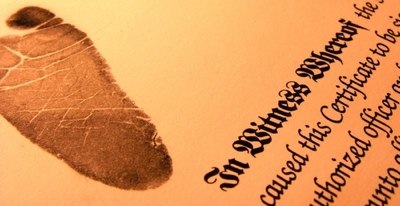 I've been thinking about why it has taken so long for the United States to grasp that adopted citizens should have a right to an accurate copy of their birth certificate.

A struggle for the average citizen to understand adoptee rights comes from the urban legends that circulate like wildfire -- until they are seen as true --when in fact, they are false.

The laws are far behind the realities of information, the internet and the wants and needs of modern original mothers and adult adoptees in domestic adoption.

Adoptees are dying every day without their medical history, and the stories of their lives.  The progress has been slow since Oregon opened birth certificates to all adoptees in 2000. Read about Oregon's law here.

The following myths are alive and well in the minds of the opposition of adoptee access to original birth certificates.

Every adoptee needs to be well-versed in "talking points" when the legislature, family and friends ask valid questions as to why the laws should change.


Myth:  Opening birth certificates to adoptees will cause abortion rates to increase

Kansas and Alaska have never sealed birth certificates.  Yes, you heard that right.  NEVER.  And their rates of abortion have been lower than the average for the nation as a whole.  See the research here

Large lobbyists fight against our right to our own copy of our original birth certificates, because they believe this myth and/or want to protect their financial investments in adoption.

It's disconcerting that there is such a psychological tie to seeing an accurate record of your birth and the right to abortion.

If you really think about it, there is not a true tie between the two acts; however, in people's minds due to the urban legends, unfortunately, the two (abortion and open records) are linked in this debate.  See the groups who oppose open records here.

Myth:  Adoptions will decrease if we open the records

availability of infants as more mothers are raising their children

cost of adoption and raising of children

women realizing that placing a child for adoption is not generally healthy for their psychological well-being or that of their child.

social services in place to support women raising their children

social stigma against surrendering your child, even though the media glamorizes it  (notice this is the opposite of the Baby Scoop Era when the stigma was being an unmarried mother).


It's not logical to envision the whole adoption industry turning over on its head because a bunch of adult adoptees walk into Vital Stats and order their birth certificates.

There are a minority of  first mothers who don't want open records. But the overwhelming majority of first mothers if given a choice (and trust me, they weren't given a choice in closed adoption) want to be known to and by their relinquished child.  Studies have shown this to be true.  See The Girls Who Went Away by Ann Fessler and research at The Donald B. Evan Research Institute.

I can't imagine there was any discussion with original mothers in closed adoption about whether their child, once an adult, would order his/her birth certificate and how that mother felt about it.

Because they didn't care how she felt about it.  Her wants and needs were never a factor in any decision.  The adoption agencies/attorneys ruled and you did it their way or else.  They did, however, hear things like this:

"Try and forget you had this child.  You can have other children once your married."
"Don't bring shame on your family by raising this child."
"This child will be better off with married parents."
"Move on with you life."

These social stigmas and the closed records mentality of that time period has taken an inordinate amount of time to catch up with the current realities of our times:   that a majority of current original mothers know their children and want contact with them.


Closed records were never intended to provide original mothers with any form of privacy.  In a landmark case in Tennessee, Doe v. Sundquist, the justices say:

In U.S. history, adopted persons' birth certificates did not start out as sealed prior to the 1930's and most adoptees could access their birth certificates until the 1950s. See brief history here and full history in Wayne Carp's book called Family Matters.

As pointed out, two states in the U.S. were never sealed.

In addition, all adoption records and birth certificates are seen by somebody:  social workers, judges, attorneys, adoptive parents, Vital Stats employees, and Confidential Intermediaries, not to mention any all parties who ordered a birth certificate before it was actually sealed.

Birth certificates don't get signed and sealed on anyone's birthday.  They are only sealed after an adoption finalization, which in the state of Ohio, can be six months to many years later, depending on when the child is adopted.  There is always a window of time for somebody to have a copy of that birth certificate.

There has always been the ability to get a court order and open "sealed" records.  Sealed is a misnomer because somebody always has access to those records.  Unfortunately, it is usually NOT the adopted person who should be rightfully entitled to it.

The Court further states:
“There simply has never been an absolute guarantee or even a reasonable expectation by the birth parent or any other party that adoption records were permanently sealed.   In fact, reviewing the history of adoption statutes in this state reveals just the opposite”
-6th Circuit Court


Equal Rights are not about Reunion

Equal rights are only about equal access to our original birth certificates.  It it not about seeking family members out, although many adoptees do.

If one citizen can access his original birth certificate and another cannot, that is unethical and wrong and is treating adopted citizens different than the non-adopted.

If we believe in equal rights for all, then that has to include each and every adopted citizen in this country.