As part of the Lost Daughters bloggers, I wanted to take the opportunity to shine a light on our Flip the Script campaign.

As Amanda Woolsten states in the video below:

"We are missing a bigger part of the picture -- that bigger part is adoptees who can tell everyone what living adoption is actually like.

We need to flip the script because right now adoption agencies, professionals, and adoptive parents are doing most of the talking. ..... Flip the Script says:

What if it was me?

What if it was us that got to do the talking?

and everyone just listened.

What would we stand to gain if we did that?  I argue, we would gain alot." 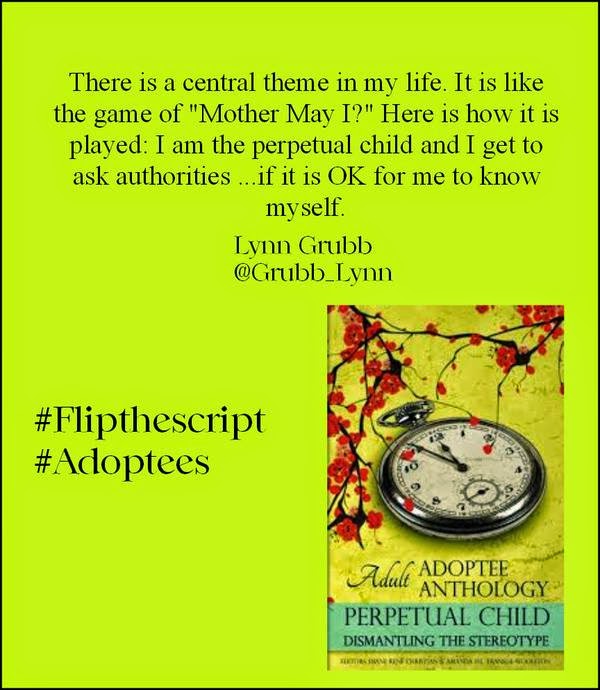 1.  We are not children anymore, Rosita points out.

When you are in your 40's, it gets old when people keep referring to you as "an adopted child".  I am an adult and I can handle my affairs like adults do.  I deserve to have the same birth documents that everyone else has and to be able to contact birth family members like everybody else does.

Nobody cares if my non-adopted next door neighbor shows up on his mother's doorstep, so why does the government care about who I contact?  Why are my birth and adoption documents withheld from me for something I had no control over?  Why, as a full grown adult, am I still being micro-managed?

2.  We can speak for ourselves.  There is not a "single story" states Amira.  Single stories are told by certain people, and adoptees are missing from the dialogue.

We all have our own personal adoption stories, and they should be allowed to be told from our viewpoint when we are old enough to speak for ourselves-- not our adoptive parents' viewpoint, not society's viewpoint, not adoption professionals' viewpoint -- OUR VIEWPOINT.

These stories may include words of gratitude or they may includes stories of abuse or anything in between.  Everybody has a right to speak to their own story, the good, the bad, the beautiful and the ugly.  I do not want somebody else, most of all, people who are not adopted themselves, speaking for me.

I cringe when an adoptive parent tells me that they have asked their adopted child to speak in front of a group about adoption (many times at church).  I worry that the child being asked this is feeling pressured to say only positive things about adoption and to disclose personal details that they are not really comfortable sharing with a group.  Especially in Christian circles, I have noticed a denial of the more complicated feelings and aspects of being adopted, the glorification of "saving orphans" and using the Bible as a way to promote adoption.

I see it as an indoctrination, one I did not grow up hearing at my church, and one of the largest barriers to Christians listening to adoptees who want to #flipthescript.  One example I can share is when I briefly attended an adoption support group at a church.  There was literally no place at the table for an adoptee who was a also a  relative adoptive parent.  When I walked into the room, and saw the table tents, I felt immediately invisible.

This experience is similar to my experience in the larger society when my voice feels drowned out  by the louder "professionals" and "experts" in the media or when I am being prompted to admit how lucky and fortunate I am because I was "chosen".

Angela Tucker, adoptee and the face behind the documentary, Closure, wrote an article titled The Missing Voice in the Adoption Conversation for Christianity Today.  I would like to see more articles like Angela's receiving exposure in the media.

3.  We are tired of hearing "feel grateful" about being adopted.  Please don't tell us we are "lucky" or should be grateful that we weren't put in the dumpster, an orphanage or languishing in foster care points out Amanda.

My daughter says that the first question people ask her about being adopted is, "How was the orphanage?".  Times have definitely changed.  The number one question people asked me when I was growing up was, "How does it feel to be adopted?"

I get it -- people are curious (and sometimes downright nosy).  However, please do not tell me how I am supposed to feel, or that I should or should not feel something just because you deem it "correct" or "incorrect".  I am thankful for my blessings, like anyone, but don't ask me to be grateful for something I did not choose for myself.  Stop asking me to be grateful for food, clothing, shelter and love, when all children deserve this, adopted or not.

Aselefech states in the video, she changed her name to her birth name and was labeled "ungrateful".

Our names are our names, just like yours are.  If we want to change our names to identify with our original families, it is no different than anyone else who identifies with their families or ancestors. Genealogy is a very popular past-time and hobby and is important for everyone, even adoptees. Names are highly personal and are important when tracing genealogy lines.  Each person, adopted or not, has a right to the name of their people. There is a process to legally change your name and adults (and even some kids) do it for many varied reasons.  No one should have to justify or explain their decisions regarding their own names.

4.  It's o.k. to have feelings states Rosita. "it's not about making everybody else who is not an adoptee, feel better".

As adoptees, we have feelings about adoption, both good and bad, and we are tired of being invalidated for having feelings that are not considered "acceptable" to the larger adoption community and/or the general public.

One of the reasons, I started this blog was to validate other adoptees' feelings and viewpoints (and is also the reason for the upcoming anthology I am editing, titled Adoptee Survival Guide) as I suspected many adoptees were feeling invalidated in the wider public as I know I was.   I probably get more than my fair share of adoption-ignorant comments, as I have always been pretty open in speaking about adoption if somebody asks me a question.  (and being an adoption blogger does come with more questions and expectations that I will speak for adoptees as a group).  Sometimes I am taken aback at how much ignorance and confusion that is being circulated about adoption.  Even when taken off guard, I do my best to calmly educate, rather than react. (some days, it is hard, I admit).

5.  Soojung states, "I don't need to have a Ph.D to be an expert in the story of my life.  My experience is a true and valid.   I want to be "one true voice' that only wants to help other people understand."

6.  "When we only celebrate adoption as happy, we don't allow for any space for trauma and pain.  It's important to allow people to have spaces to let their voices be heard," states Amira.

7.  Angela states that most Adoptive Parents do a great job of raising their kids, but when the kids reach a certain age and develop complex opinions, their voices are no longer considered relevant.

8.  Kassaye states, "what we have to say is being put on the margin."

I agree with Soojung as I am also a parent of both a biological child and an adopted one.  Being cognizant of the differences makes you a much better parent as you can meet the needs of both biological and adopted children.

10.  Amanda reminds people that we should not "parentify" a child by making them feel responsible to be adoptive parents' emotional caretakers.

The term "parentify" comes up alot in child abuse literature.  This happens frequently in dysfunctional homes where the parents want the children to be the care-takers to the parents.  An example could be asking your 7 year old to be in charge of all family meals in addition to bathing his 3 year old sibling because you don't want to do it or it can be expecting an adopted child to replace a biological child and the dreams that you yourself did not fulfill in your own life.

11.  Gotcha Day makes us feel objectified, disrespected, and is not funny.

There needs to be awareness that celebrating a day where there was tremendous loss to the adoptee may trigger difficult feelings and the child or adult may not want to celebrate.  (this includes our birthdays).

12.  "Why should we leave our pasts behind?  My past is my future" says Asefelech.

In closing, I want to state that what we as adoptees have experienced being adopted has value and my hope is that others both inside and outside the adoption community, will take notice, listen and learn.