Raise Your Hand if You are Adopted 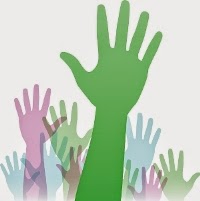 As I was sitting in church on Mother's Day, I was hoping for a great mom-parable or just something "light" and "happy" to celebrate this day -- a day where I actually wore high heals and a dress (rare!) to church.  Sitting next to my daughter in our pew without my husband as he was home getting the festivities ready for both of our mothers and me, I glanced over at my daughter.  I was  watching her draw a picture, and my attention was drawn to the pastor discussing how God brings us into His family --- that He "adopts" us.

I pay attention when I hear the word "adopt" as it is thrown around quite frequently in the legal field as new laws are adopted and occasionally at church used in the sense of God bringing us into the fold.  So I was completely taken aback when I heard these words from the pastor,

"If you are adopted, raise your hand."

My eyes quickly darted around the church at the congregation and I noticed a couple hands went up. One of those adoptees was a teenager who still remembered living with his original family.   I then looked to my left at my daughter and her hand went up.  I sat there not moving.  Then the pastor looked at me and said something referring to me also being adopted (I later learned my daughter was pointing at me!).

Honestly, I heard but didn't really hear the comparison of our adoption by God with earthly child adoption via law.  I was somewhat shocked that this was the sermon topic and even more shocked that adoptees were being asked to raise their hands.  What was said after that point no longer resides in my memory.

This scenario was mortifying to me.  In a similar way that it's mortifying when I hear an adoptive mother tell me that she asked her daughter to stand up in front of their church and talk about how fortunate she is to be adopted (creating a sense of obligation).  The same way I feel mortified when I hear in a sitcom someone telling their sibling they are adopted is being used as a joke (Obviously, it is being used as an insult).  The same way I feel mortified when I overhear someone at work talking about her sister's "adopted kids who feel this or think that". (as if anyone can know how anyone else feels about their own adoption).

It is presumptuous to ever believe you know more about being adopted than someone who is actually adopted.  You don't and you never will understand in the way people living it can.  I will go out on a limb and say if you aren't adopted, you should never preach or speak on the topic at all.  And if you do, I hope you have done your homework and have educated yourself that the media portrayal of adoption and the typical Christian comparison of adoption by God versus earthly legal adoption is not accurate in portraying the actual lived experiences of those of us who are adopted.

Critical thinking is a must.  We cannot continue to wrap up adoption with a bow and discuss it in black and white terms.  It is a complex, emotional journey that cannot be simplified and compared to God's love in a 15 minute sermon.

Although as a child I had no problem telling people I was adopted (I wasn't brought up with any shame for being adopted), as an adult I have a very different view.  Being adopted is my business and nobody else's.  I happen to be an adoption blogger; however that does not mean I walk around with a T-shirt that says, "ASK ME ABOUT BEING ADOPTED".    It does not mean I want to be singled out and discussed as part of the sermon making a not-even-close comparison of  two completely unrelated concepts.

I tell my daughter all the time it is her business that she is adopted and if she chooses to share that with friends, that is up to her.  She does not have to feel obligated to share it with anyone at all. There is no reason to feel ashamed, but I recall that even though I didn't feel shame about my adoption, other kids in middle school told me I was "weird" for being adopted.  Kids will tell you that your original parents didn't want you and that is the reason you are adopted.  Adults assume all sorts of stereotypical things about you the second they learn you are adopted and many times will ask you to be a spokesperson for all-things-adopted.

Asking someone to raise their hand if they are adopted is not like saying, "Raise your hand if you like the color red."  It is a violation of privacy and not appropriate to do in public.

What is difficult to manage when one is adopted or raising an adopted child is a happy medium approach when the topic of adoption status comes up.  You don't have to feel ashamed but you also don't have to draw attention to yourself and invite people to speculate about your history, either of your families, or the circumstances surrounding your adoption or subsequent reunion (all private).

The experience of living adoption in a non-adopted society is this:  we are a minority and have already experienced being singled out in many other ways as we were growing up adopted.  The non-adopted majority in society really has only one narrative of what they perceive being adopted is, "a blessing, lucky, special, second-best or God's will" depending on the person.  It's time we eradicated these stereotypes and allow adopted people to be fully recognized as being multi-dimensional in a way that non-adopted people are.

Please stop putting us in a box or asking us to raise our hands.

*Don't make assumptions about how adoptees feel about their own adoption status.  Some are happy to share the information and some will be mortified with your prying.  Some see adoption as a win-win and many of us see adoption as a lose-win and there are others who see it as lose-lose.  If you don't know, don't assume.

*Avoid talking about other people's adopted children or adopted adults you know and making assumptions about "how they feel about being adopted".   Your cousin's sister's adopted teenager does not confide in you about her true feelings -- avoid projecting your own ideas about adoption onto a virtual stranger who happens to be adopted.

*Don't repeat stereotypes about adoption such as, "you never know what you will get" or mentioning adopted characters in books or movies or in real life who do bad things, such as serial killers or "the bad seed". This is no different than being careful not to make racial or religious slurs.

*Educate yourself and others on how God adopting us into his family is nothing like earthly, legal, money-exchanging, U.S.A. adoption and speak up if you hear a sermon or other generalizations being spread to the public about how the two are the same (they are not!).

*If you are a pastor, please educate yourself on how adoption today is nothing like the concept of adoption was during Biblical times and should not be used in illustrations involving God's love.  This is hurtful to children's developing concept of God.  ("did God not want me to be loved by the family I was born into?") -- this topic can be many other blog posts, but I will send you on over to Adoptee Restoration for Pastor/Adoptee Shrodes to educate you on those topics.


*addendum* -- after  this blog was posted, my husband reminded me that my memory was a little off.  Although the above blog is a true story, this actual event occurred the Sunday before Mother's Day.  My husband was actually sitting beside me in the church pew and was just as baffled as I was that adoptees were being asked to raise their hands.