When Are You Going to Get Over Being Adopted? 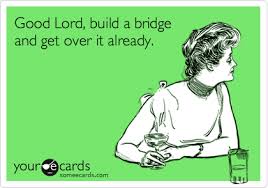 As National Adoption Month comes to a close, I want to address a very common question that most adoptee-activists/writers/artists endure:

"Why are you so obsessed with adoption or why haven't you gotten over your adoption yet?"
I can only answer for myself but I am certain others have felt the same pangs of misunderstanding every time they are asked these questions, which I suspect is often.

As I have stated on this blog and to people in my life, "adoption has colored and affected almost every aspect of myself from birth onward."

Adoption is not just a legal status that created a forever-family. It is an action taken upon me that changed the entire course of my life. There is no pre-adoption me that I have any conscience awareness of. Kristy Lee Unger (my alter identity) never had a chance to live or exist in this world as I became Kathryn Lynn Wetherill at age 11 months at the time of my adoption finalization.

This life-altering circumstance is always with me in everything I do. I never stop being adopted. As of right now, there is no legal mechanism that I am aware of that allows somebody to stop being adopted which means that I will always be adopted under the law until death. It's true that some adoptees do not identify with being adopted; however, there are many others who, when they are being honest with themselves and others, have felt different their whole lives or have avoided thinking or talking about their adoptions their entire lives until a major life change occurs (i.e. death of adoptive parents, birth of a biological child, adoption of a child, loss of a spouse, etc.).

I have no awareness of how it feels to NOT be adopted, to grow up with blood and to take for granted all the benefits of being raised by biological family. This is a fact of my life that I have chosen to face, to examine and to write about. Others may make a different choice; however, that in no way makes my choice wrong. It in no way implies there will be a day that I am suddenly and forever "over it". We all lived happily ever after occurs in fairy tales for a reason. Each of us is always learning, growing and changing over our lifetimes and to ask somebody when they are going to get over being adopted is frankly, hurtful.

I remember as a child in elementary school looking in awe at my neighbors who had four boys, all who looked alike. The first time I witnessed pregnancy and breast feeding was at this neighbor's house. I was amazed at nature in action--something that I would never witness my adoptive mother experience. These same neighbors all loved soccer. Their dad coached and I spent many hours in their backyard (which they turned into a soccer field) playing soccer. I always admired the cohesiveness of this family and noticed that they had something very important that my family never had -- a blood connection (evident by their likeness) and lots of extended family that spent time together.

During this same time period, back in fourth grade, some musicians came around to my school with an instrument demonstration. I had this overwhelming desire to play the violin and ran home after school to inform my mother of this. I was very fortunate that, much to my surprise, there was a violin in the closet that my mother pulled out that was my great grandfathers! I was also very fortunate that my parents supported my playing the violin, including paying for private lessons, and shuttling me to never-ending concerts (I played in two separate orchestras).

I can only imagine now how it would have been different for me when I was identified as a gifted musician in 5th grade, had I known my biological grandmother was a concert pianist. How would that have felt different to know that I come from a family of painters and musicians and to "know" without a doubt that this was a talent and gift that ran in my family?

I was fortunate that my adoptive mother also had been actively involved in both choir and orchestra. She always said to me that she was never as good as I was at the violin. My mom always told me that I never appreciated my musical talent. What did that even mean I often wondered? Should I feel bad that I had this natural gift? What would "appreciating my gift" actually look like? I see now looking back that my mother was right. I never could fully embrace my gifts as a child. Was this because of my adoption?

Since learning of the artistic and musical connection in my birth family, I have become actively involved in music ministry at my church and I have picked up my violin again. Coincidence?

Knowing I am a descendant of other artists and musicians in my biological family has given me a sense of confidence and belonging that I never had before. It also has given me "permission" to explore these gifts further. Some could argue, it's age and maturity, and I'm not discounting those possibilities as well; however, I also sense the positive result of knowing where I come from being expressed in my life.

In addition, as every artist knows, our creativity comes from a deep place of emotion and experience. All artists create from this place and if we did "get over it" ("it" could be adoption, alcoholism, death of a loved one, sexual abuse, cancer, the list is endless), what would be left of the muse to tap into? 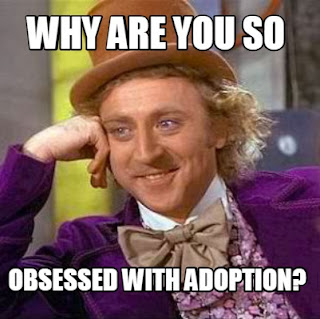 I was recently explaining my "obsession" to a friend in this way: because I grew up in closed adoption and was unable to access my adoption file and original birth certificate as an adult U.S. citizen, that I felt a sense of responsibility to other adopted people coming after me who will be in the same predicament. As a child and young adult, I felt powerless to act in any way against these inequities. As a mature adult, I not only can act, I feel I must act.

Adopted artists bring all of who we are to our creations, whether those creations are a beautiful painting, sonet or poem. Adoption can also influence other creative outlets such as volunteering as a search angel or an advocate to change discriminatory laws.

Adoption is part of who I am.

So when you ask when we are going to get over it? The answer for me is: never

I will never get over what has colored who I am and that place where I create from.

If you were hoping for a different answer than the one I provided, I will send you on over to the Humanist Adoptee where she writes about how to get over being adopted.

I will close with this quote from Kara Albano, adoptee advocate and writer:

"Many people ask me my opinion on adoption, like I'm some expert because I have lived it. For some reason every person has the same question, "Do you like being adopted?" "How does it feel?" "Do you wish you weren't adopted?"

That's a long answer with a lot of contradictions and typically I don't go into it. I have my own thoughts and feelings but one thing I always say is, 'how can I hate something that is so much a part of me?'

. . . .so in the grand scheme of things, how can you hate or love something that has changed fate for so many? You can't. You just need to accept." -- from "The Road to my Truth" in The Adoptee Survival Guide.