"This is Us" Honors the Complexity of Adoption 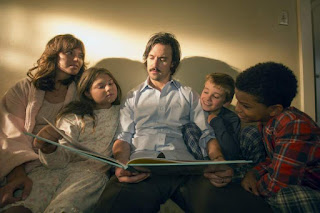 It’s a rare moment when I can turn on a T.V. show that has adoption as part of its storyline and not cringe, roll my eyes and talk back to the T.V. about how they just don’t get it.  Sometimes it’s just downright painful to watch the same old stereotypes and adoption rhetoric play out.

I don’t have that same experience when I watch NBC’s This is Us.  In fact, there are so many “I can’t believe they got it right” moments that it would take a whole series of blogs to ponder them.

Here is a list of some of the issues that are addressed in This is Us:

A few examples from the show:

In one scene when Raymond’s adoptive parents are pondering his identity, Raymond’s father Jack states to Raymond’s mom, Rebecca, “It kills me that he will always have this hole not knowing who his parents are.  He has questions – they are not going to go away.  I don’t want him resenting us. “

In a later episode, upon learning that Raymond’s birth father, William, is musical, Raymond begins questioning his career focus on math and science.  He tells his wife, “There is this whole genetic side of me that nobody ever knew existed.”

ABANDONMENT ISSUES (with a bit of guilt on the side)

In an imagined conversation by Raymond, his dad says, “we gave you everything! The most loving family, private school, we made sure you had black influences so you could understand your background.”

“If I had known that the man who abandoned me had regretted it and wanted me back, that would have made all the difference in the world.”

FEAR OF LOSS AND LOYALTY

Jack asks Rebecca, “Why are you against even trying? (to find Randall’s birth parents)

Jack:  “I would never let that happen, ok? I promise.”

Rebecca:  “We need to be enough for him!”

Raymond tells his wife Beth on Christmas Eve in the final episode of the first season, “You know what I want? I want it to go back to the way it was before, before I went and stirred everything up and found William (birth dad) and opened the door to  everybody’s drama.”

I am really excited that This is Us is educating the general public about adoption complexity and I look forward to being able to write more about how this story line unfolds in the second season.

I imagine there are many adoptees, birth parents and adoptive parents who, like me, have had many “a-ha moments” and shed a few tears watching the real and emotional scenes portrayed.

This is Us is on Tuesday nights on NBC.  If you want to watch full episodes of Season One, go here.