Review of the Movie "Instant Family" 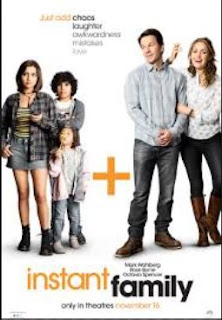 Yesterday I went to see "Instant Family" with a friend of mine. This movie was timed to open during National Adoption Awareness Month, and brings much needed awareness to the children in foster care, some of whom are available to adopt.

As a former CASA/G.A.L. for my local juvenile court, I was very interested in seeing how this movie portrayed the system, foster/adopt training and support, the realities of kids biological parents, the courts, and adoption in general.  (I tried to take notes in the pitch dark and wasn't very successful 😍).  My husband and I have gone through foster-to-adopt training three times. We briefly were emergency foster parents in the 90s.  And of course, we are also kinship adoptive parents to a now-teen via a private adoption.

I had read two reviews (one negative and one positive) before viewing it myself.  My rating is 7.5 out of 10 as I believe it will educate the general public about the plight of children in foster care.


Based on a true story of writer/director, Sean Anders' and his wife, a couple, Pete and Ellie, adopt a sibling group of three through foster care. I had heard the movie described as funny-it's actually listed as a "comedy"; however, I found it more of a feel-good movie with  tear-jerker moments (I cried a handful of times).

The parts that were supposed to be funny generally took place at the couple's foster-to-adopt support group.  The two social workers leading the group were opposites -- one was more of a sugar-coater and the other more of a straight shooter.  I really liked the straight shooter -- she seemed to really "get it".

At times, it felt like the script was trying too hard to get laughs.  For example, often the support group members would laugh at each other's expense, not providing the support one would hope to find. The family dynamics of the parents' extended family also seemed a bit hostile, with jealousy and competition being shown as humorous.  If nothing else, it was realistic. We all have family members who are far from supportive. Unsurprisingly, the family members warm up toward the end.

The movie did a good job of showing the complexity of parenting traumatized children, in addition to the struggles with visitations; however, you are left feeling like everything worked out wonderfully at the end. Hollywood loves happy endings.   The kids get adopted and become a bonded family.  Although all seems well, the birth mom and her relationship with the kids is left open.  There are many unanswered questions.  What does shine through is that these kids now have the stability of two parents and an extended family who love them.

The saddest reality I got from the movie was the dismal stats on kids who age out of the foster care system. In one scene, Ellie is perusing kids on-line who are available for adoption and she tries to get her husband to have a look but he refuses, because it's so sad to see those faces.

I have mixed feelings about the photos on-line of kids who are available for adoption.  I think it's sad to post their photos; however, it is also likely necessary for families to be able to get to know (albeit briefly) from a bio and to visualize in advance their family.  In the movie, what the couple actually visualized turned out to be different than who they ultimately ended up with, which is kind of cool.  They were charmed by a teen, and when they realized the two younger siblings came with her, they were taken aback at first.  They probably did not picture themselves with a sibling group; however, they eventually embraced the idea.  I will admit the idea of the adoption picnic (one of which my husband and I have attended and is shown in the movie) is uncomfortable. Again, probably necessary, yet sad.

I read some reviews of movie-goers and some of the critiques are as follows:

*too much foul language in the movie and exaggerated corny humor
*not accurately showing the true struggles of foster kids (i.e. pharmaceuticals, therapy, rotating caseworkers)
*not a movie for foster children to watch as it may re-ignite trauma for them

Things where the movie could have done better are as follows:

*not showing a truly supportive support group. I would have liked to see more empathy, listening and validation in the room and less wise-cracks from across the room. I did like the one scene at the support group where they cut string in an exercise to understand what foster children lose when they are moved to a new home.

* showing the kids at the court hearing with their biological mother.  That doesn't happen in my state -- not sure if it happens in California, but I would doubt it.  Just a bit of extra drama for Hollywood and extra trauma for the kids if it actually happens that way.

Things I felt were positive about the movie:

*it was honest in it's portrayal of shifting motivations of why people adopt and how they see themselves as parents.
* the movie explored the myths involved in parenting "other people's kids" in a scene at dinner where the extended family openly discussed their misgivings about adoption in general. (Later, these same family members are really shocked at how 'normal' the adopted kids are.)
*I enjoyed watching the changing relationships between parents and children and how strong the bond became toward the end of the movie.  It's a process and it doesn't happen overnight.
*I also loved the part when Pete's mom shared her own personal story to help the couple understand their oldest daughter who was afraid of love.

My favorite part about the movie is the awareness and call-to-action it brings to the plight of foster kids.  A quote by a former foster child, Noel Anaya:

"Walking into court for my very last time as a foster youth, I feel like I'm getting a divorce from a system that I've been in a relationship with almost my entire life. It's bittersweet because I'm losing guaranteed stipends for food and housing, as well as access to my social workers and my lawyer. But on the other hand, I'm relieved to finally get away from a system that ultimately failed me on its biggest promise. That one day it would find me a family who would love me."

To me, the movie serves as a call-to-action to prevent kids entering the system in the first place.  There are things you can do in your own family and in your local community to help children.  Adoption is only one piece of the equation, albeit the most celebrated in our society.   Not everyone will be in a position to adopt; however, there are other things you can do:

*Parent a child while your relative/close friend gets back on their feet
*Become a mentor to kids in your community
*Become a CASA/Guardian ad Litem in your community
*Support non-profits like the Adoptee Rights Coalition and Adoption Network Cleveland that do legislative work.
*Support non-profits that have active support groups like  Adoptees Connect.
*Support your local kinship program or develop one like Ali Caliendo did in Las Vegas, Nevada.
*Provide respite for foster parents formally or informally
*do a church fundraiser for foster kids so they can have proper luggage or bags to transport their items (instead of black garbage bags)
*Adopt a family at Christmas and provide gifts
*support family preservation groups like FP365 and Saving Our Sisters.

You can also go to the movie website for information on how you can become eligible to foster and/or foster-to-adopt the many children waiting for homes.
#NAAM #NAAM2018 #adoption #adoptee #adopted #instantfamily #Adopteerights #fostercare #fosterkids #adopt #foster-to-adopt #SeanAnders #CASA #GAL #kinship #familypreservation