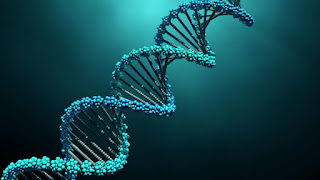 NOTE:  New York State has opened its original birth certificates since the writing of this article.

Legislative efforts to restore access to original birth certificates have, unfortunately, focused primarily on search and reunion. Emotional testimony from adoptees, first parents and "adoption experts" have been countered by equally emotional testimony and speeches by agencies, legislators, and other "adoption experts".  There is talk of "balancing the rights" and "compromise" as if any other individual's rights to his or her OWN record of birth is also subject to permission from the state, a judge, or the parents named thereon.

Mutual consent registries, like the one in New York, will typically "reunite" registrants that have been matched but access to the birth record still requires a court order which a judge will not give you because "you already have the information". Other states will provide a "birth transcript" or "identifying information contained in the birth record" but not the birth record itself.  For those who need the information to advance their searches, the chance of having the information within their grasp is enough to make them support "compromise" legislation that may be to the near term and long term detriment of themselves and many of their fellow adoptees.

Once upon a time, sealed records were impediments to search and reunion.  If an adoptee did not have access to his or her sealed adoption file, there was little chance that a search for family could even be started, much less successfully completed.  Successful searches relied upon adoptive parents retaining a memory of a name mentioned or a document seen.  In direct contradiction of what courts, legislators and agencies are NOW telling us, some adoptive parents were actually GIVEN documents that contained the names of the relinquishing parents.

As time went on, laws changed and adoptees were given "non-identifying information" as a pacifier in lieu of access to the original birth record. While not a restoration of access rights, "non-ID" was a tremendous boost for many searches. Some states even passed legislation to provide birth information access for some or all of their adoptees. Adding online resources for genealogy, people search and social media to the mix initiated a flood of successful searches along with a growing population of adoptees (and descendants of adoptees) who had never searched before because they had zero information to start with.

The argument started to shift.  On the one hand, advocates demanded equal rights to that Simple Piece of Paper. Not reunion. Not medical history. Just the birth record. On the other hand, opponents were still pushing the "what if your mother doesn't want to be found?" argument. Advocates explained that there were "plenty of other ways" for searches to be completed but opponents countered with "we don't have to make it easier for you", implying that only a few lucky adoptees were successful in their searches and that sealed records would still prevent the vast majority of adoptees from "intruding" on an unsuspecting birthmother's life.

Then came the DNA revolution.

When I saw those words, I rejoiced. The NCFA, until recently the most outspoken opponent of restoring access to original birth certificates (“OBCs”), was close to admitting defeat. How did that happen?

As Chuck Johnson also stated in the same article: 2

“Once a person has a name and originating city, the Internet and modern-day services — from private investigators to confidential intermediaries — make it easier than ever for adopted and birth families to connect.”

All true but it only tells part of the story. First, adoptees don’t need a private investigator or confidential intermediary to do this. Second, we don’t even need a name or an originating city.

We already possess everything we need in a half-teaspoon of saliva. Everything you need is in your DNA – The stuff of life, and ancestry, and answers.

While various state legislatures were debating whether adoptees truly deserved to know who their parents are, modern direct-to-consumer DNA testing has been creating a revolution in genealogy circles.

But what exactly is this “DNA testing” about?

The most popular DNA test is an autosomal test, covering all ancestral lines with an effective range of 500 years. This is not a deep ancestry test on the strict paternal line (Y chromosome DNA) or strict maternal line (mitochondrial or mtDNA) so it can be used to identify close to moderately distant ancestors.

For $99 ($79.00 when on sale), you can order a DNA test from Ancestry.com, the largest for-profit genealogy company in the world. Two other companies sell similar tests: 23andMe (with an additional focus on medical genetics) and Family Tree DNA.

When you receive your AncestryDNA test in the mail, you register it to your online account at the company, spit into the tube, cap it, shake it, and mail it back. In about four to six weeks, you will get an email telling you that your results are ready.

When you log in to your account, you will see your ethnic breakdown in percentages: 23% Irish, 37% Scandinavian, etc.

You will also see an extensive list of DNA matches, people in the company’s database who have some DNA that is identical to yours, meaning that you probably have a common ancestor within the past 350 years or so. That list is the key to searching for an adoptee’s biological family.

After the initial shock of seeing a list of several thousand people you are genetically related to wears off, you can explore your match list in greater detail.

Your match list is ranked by the amount of DNA you share – ranging from Twin (having virtually identical DNA) to Distant Cousin (5th cousins and out who share only a tiny part of your total DNA). Of your matches, which will number in the thousands, about 95% will be in that Distant Cousin category. Several dozen to a few hundred matches will be in the mid-range “Fourth Cousin” category, indicating a common ancestor within the past 200 years or so.

When Ancestry launched their autosomal DNA test in 2012, following launches by 23andMe (2007) and Family Tree DNA (2010), we were all hopeful that the expected size of Ancestry’s DNA database would allow more adoptees to identify family by “triangulating” their 4th cousin matches. We expected that more than a lucky few would “hit the DNA lottery” with a second cousin match. We were not prepared for what happened once Ancestry’s DNA database hit one million tested in July of 2015.

People in the DNA databases are overwhelmingly customers with no known connection to adoption. This is not like a reunion registry where people are “looking for someone”. The people you match with are generally not looking for you.

While third and fourth cousin matches can be used to identify immediate family through a method known as “triangulation”, it’s usually the case that those matches aren’t too concerned about some distant cousin’s scandalous pregnancy. The situation is different when the adoptee gets a second cousin match.

Second cousins share great grandparents. One of the adoptee’s birthparents is a first cousin to one of the DNA match’s parents. There is a very good chance that this match knows one or both of the adoptee’s birthparents. They probably don’t know which of their mom’s or dad’s cousins placed a child for adoption, but they are often eager to help the adoptee figure it out. If the adoptee has some good non-identifying information from the adoption agency, a comparison of ages, family structure, occupations, and locations is usually enough to identify the right person. At the very least, there will only be a few “candidates” to research. Even if your new cousins don’t respond, experienced search angels can build a tree starting with nothing more than a name or Ancestry ID.

When an adoptee gets an even closer match – a first cousin or a half-sibling, for instance – even if the adoptee never attempts contact, the match can easily figure out that this is someone very close but not someone already known to them. The adoptee’s existence is no longer a secret.

Recently, author Blaine T. Bettinger 3, well respected in genetic genealogy circles, posted a survey on Facebook’s DNA Detective's group 4, a nearly 60,000 person strong collective led by “genetic genealogists focused on finding biological family for adoptees, foundlings, donor-conceived individuals, unknown paternity and all other types of unknown parentage cases”. His survey was limited to adoptees who had done their first DNA test in 2015 or 2016, and he wanted to know what their matches looked like when they first got their results. He received nearly 600 responses and the results were nothing short of amazing as we now had real data, not just an anecdotal string of success stories. 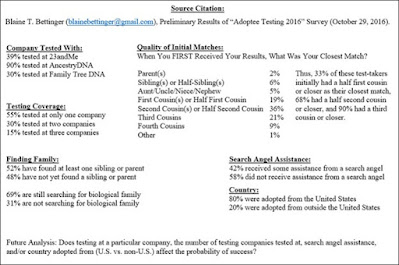 •         68% of adoptees had received a second cousin or closer match upon first opening their results.

•         33% of adoptees had received a first cousin or closer match upon first opening their results.

Those results are based on initial match lists from when the combined DNA databases of all three companies (adjusted for a 20% overlap in people tested) was between 1.5 and 3.0 million people. The vast majority of respondents (90%) had tested with Ancestry.com. 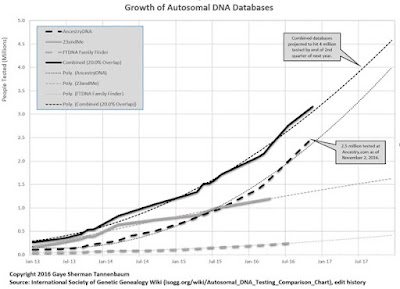 Between DNA testing, social media, and other available resources, most adoptees will be able to learn the identities of both parents if they so desire. In most cases, the OBC will not contain the name of the biological father but DNA testing does not discriminate. In some ways, DNA testing is a superior tool when compared to OBC access. Legislators, for the most part, have not caught on to the fact that vast numbers of adoptees are identifying their families (as well as the families of their adopted parents and grandparents), no matter what the laws and restrictions in their various states may be. We’re finding our families and we still want copies of our original birth certificates.

Nearly all of the recently introduced bills and recently passed laws assume that (a) without access to identifying information, an adoptee has little chance of identifying any parents, and (b) the only reason an adoptee would want a copy of the OBC is so that they can identify, and contact, those parents. You can hear it in the arguments, both supporting and opposing. “Adoptees need and deserve to know.” vs. “We cannot release identifying information if there’s any chance it might be detrimental to any parties.”

If the adoptee already has identifying information on his or her parents, opponents can’t make the usual argument that disclosure may be harmful. Eternal anonymity, for those who still insist that it is "vital to the adoption process”5, is an antiquated notion as well as a false promise. With genealogical DNA tests, lack of the OBC is no longer an impediment to identifying parents. It's merely an inconvenience. Just like posting a “help me find my family” plea on social media, connecting with close family via DNA matching is not the most tactful way to make contact.

What advocates for restoring access should be asking legislators is this:

Doesn’t a disclosure veto merely create the illusion of anonymity given that adoptees are surprising their biological families by getting DNA matches to their first cousins and half-siblings?

Wouldn’t it be more private to release the OBC to the adoptee so that he/she can (if desired) make direct contact in a sensitive and discreet manner rather than clinging to the archaic concept of "adoption secrecy"?

Advocates for restoring OBC access may want to make those points when talking with legislators.