My mother is an American Philomena

- February 04, 2014
I drug my poor husband to the movie Philomena the first week the movie came out.  He is such a good sport and he seemed visibly moved by the movie.  He didn't cry (like his blubbering wife) but he got extremely angry at the treatment the "real" Philomena endured in the Irish Laundries.  This is not a fictional story. 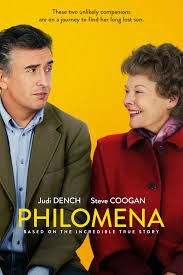 This a true story of how the Catholic Laundries of the past shamed pregnant women by not only stealing their children, selling them to Americans and others but then forcing them to work off their room and board.  As shown in the movie, no sympathy, empathy or understanding was conveyed to these "wayward" women.  Only punishment for sex outside of marriage and their "sins".

What movie-goers may not understand is that this is not just isolated to Ireland.  This happened in Australia, Canada and the United States.  (Meet some other U.S. Philomenas here)

This happened to my mother.  My mother was fortunate that she was not in a religious maternity home; however, she was in a maternity home where pregnant girls were not allowed to tell each other their last names.  Where women were discouraged to hold or even see their own newborns.

She made light of the stories of her time there, but I know it was no picnic.  My mother is not alone -- there are millions just like her but they seem to be silenced and forgotten as the Adoption Party Line is that "closed adoption isn't done like that anymore in the U.S."

Kathryn Joyce, Author of The Child Catchers:  Rescue, Trafficking and the New Gospel of Adoption states:

"This fall, I sat in a room full of mothers at CUB's (Concerned United Birthparents) annual retreat--women who had relinquished children for adoption ten, 20, or 40 years before.  It was a room moved easily to tears, as panel after panel included personal testimonies from women who, decades later, were still hoping to reconnect with their now-adult children, or who had found their children and reunited, only to have them later pull away, overwhelmed by the weight of emotion.  No matter how many years they were removed from that loss, the women I met still mourned.  And many were still angry."

My mother represents one of the silent original mothers from the Baby Scoop Era.   She is not involved in support groups, she does not tell her "story" to the media and she does not speak of her suffering.  Yet, I know she suffers.  I know that every year when she thought about "my black hair" around Christmastime, she was mourning me.  I know that her inability to remember my exact birthday was due to trauma and pain surrounding the event.  I know when she made excuses for her own mother to me that she was just trying to make herself feel better for doing the unthinkable -- giving me away.

A friend read my story in Perpetual Child: An Adult Adoptee Anthology and asked me, "Is there bitterness?"  I said, "Absolutely there is bitterness. There is bitterness toward the adoption system. My original mother was a victim of the times."

Some of you may believe that being a victim is unattractive and disempowering, and you would be correct.   When I came into this world, it was not a happy event. Society shunned people like my mother.    My mother was only being human -- doing what people do -- having sex with someone she cared about.  The people around her (family, society, authorities) said that because she was single and pregnant, she was bad.  That message took root and created the shame that many original mothers live with today.

I no longer see myself as a victim, but a survivor.  I looked closed records in the face and said, "Not gonna stop me!"  I looked my mother in the face when she was 63 years old for the first time and felt immediate relief and compassion towards her.

I do not accept how my mother was treated nor will I stand by and stay silent while new women every day are being shuffled into the Adoption Machine.

What kind of choices are truly available to women when there is no family support, no societal support and no financial support?

Even today, there are women who fall into this category.  I disagree that these women should be persuaded to relinquish their flesh and blood.  Instead of feeding the Adoption Machine, we need to have more compassion for women in a crisis pregnancy.

A woman does not need pressuring  for or against adoption. . . she needs support in believing that she is good enough to parent her own child, regardless of marital or financial status.

When she believes that she is good enough for her child, then she will begin to look for the resources to parent.  If she decides to relinquish, she will have (hopefully) done so from a place of empowerment, not desperation.

Let's stop acting like relinquishing one's child is a panacea to moving on with one's life.  Let's acknowledge and embrace the Philomenas walking among us.

They deserve to be heard.