Late Discovery Adoptees (LDAs) And What We Can Learn We learn in the context of other people’s questions*.

I wrote these words down on a sheet of paper on Thursday.

On Friday night, I watched this concept come to fruition during #adoptionhappyhour with Indiana Adoptee Network, which featured a panel of threemale late-discovery adoptees. (Please join us here!)

Not being an LDA myself, I turned to the internet for research:

“The few studies that exist indicate that the late discovery of adoption is linked to psychological distress and feelings of anger, betrayal, depression, and anxiety.”

This should be no surprise considering many LDAs learn that almost everyone in their family knew they were adopted but kept the secret along with their parents.

As someone who grew up knowing from a very young age I was adopted, it’s unfathomable to imagine learning this vital information as a young adult or in middle age.

As I listened to their stories, I hung on almost every word, imagining what it must be like.  Stories about how the ground shifted beneath them, of DNA tests, finding the adoption community, acceptance of this new reality; and their desire to help others in the same boat. I can completely understand why LDAs have their own separate support group from the rest of the adoption community.

The Q & A time, which is not recorded for privacy purposes**, really left an impression on me.  Two questions that really stood out: 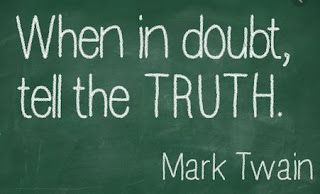 2.   How Do I Deal with the Reality I May Never Know my Birth Family?

What these two questions have in common is that we are only part of the equation in both of these scenarios.  Considering we don’t control other people’s responses and we also don’t control whether the current DNA technology can work for all of us, these questions force us to dig deeper to see where we do have power.

We can’t force someone else to tell the truth and acknowledge truth, even with irrefutable evidence. We can encourage them, but ultimately people have a right to their own version of reality. Having conversations with adoptive parents is not always possible.  Many LDAs learn of their adoption status after their adoptive parents’ are deceased, when sorting through the parents’ belongings.

Many LDA’s I have spoken to have an inkling that something is “off” in their families but they just can’t put their finger on what it is.   They deny their own reality because others around them deny it too.  This dynamic may set up adoptees for abusive and exploitive relationships later down the road.

If I were facing a denial about adoption within my own family,  I’m certain confrontations with my parents would ensue.  I’m also certain that I would reach out for help and support, which I acknowledge in our individualist and grief-allergic society, is not always easy.

With social media, genetic genealogy, public records, and state’s opening up original birth certificates to adoptees, those toxic secrets are just not sustainable in today’s society.

And sometimes it’s a family member or close friend who drops the truth bomb.

When we prepare our children to go out into the world, we want them to be well equipped for facing everything life is going to throw at them.  How can denying adoptees their identity ever be justified by parents?

Parents may have their “reasons”, but if they really evaluated those reasons, they would eventually have to conclude that the reasons are about their own fears and insecurities, and not about the child they are parenting.

In addition to damaging the trust in the parent/child relationship, keeping a secret of this magnitude, and by denying them their birthright, sets adoptees up to not trust themselves on other matters.

I’m not a psychologist but I imagine there are other psychological risks inherent in these types of lies of omission.  Clearly, there are medical risks when a doctor is told the wrong medical history year after year.

And here is another issue: parents who lie about adoption status may be depriving their children of the opportunity to know their birth parents while still living.  That in turn denies the birth family from knowing that the child they have spent many decades worrying and wondering about, is alive and well.

When you have a need to know and cannot know, this is painful stuff.  Friends of mine in the adoptee community suspect, but don’t have numbers to back it up, that adoptee suicides are more common amongst international adoptees.

Just knowing that adoptees attempt suicide at four times the rate as non-adoptees should be reason enough for parents to not only be honest, but to support their adopted children/adults in learning the truth about their background.

My biggest fear in life was that I would die without the knowledge of who my birth parents were. (I have a few other fears of course, but this one loomed large).  Well-meaning people have said to me over the years, “You are still you!” in the face of my trying to process lies and new truths revealed during my search.

And now, being on the other side of knowing the identity of both of my birth parents, I am still me; however, I’m different in many ways.  Having the information and knowing the truth changes us in ways that I don’t even think there is research out there yet to fully understand.

My hope and the main reason for me writing at this blog is to validate any adoptee who is seeking knowledge about themselves, even in the face of pushback. It is a very brave thing to reach out to ask for support and/or to begin a search, and I applaud you!

I can recommend international adoptees or parents of international adoptees find a support group of others in the same situation who can provide support in accepting the possibility that you may never know.  I was unable to accept that outcome myself, so I have no personal experience with this type of acceptance, but I feel certain their are other adoptees who have made peace with this realization.

I also want to encourage any adoptee who is feeling hopeless to never give up. Autosomal DNA testing is getting more and more popular.  Do all you can do (i.e. fish in EVERY pond), with support, and let the chips fall where they may. (I know, easier said than done).

It is your absolute human right to know the truth and find your original family members if you desire to do so.  This right may not be upheld by the law in some states (yet), however, if nobody else has given you permission, let me be the first to do so.

However, it only takes one person to acknowledge your truth:  YOU!

*with credit to Dr. Yvunne Gustafson

***with thanks to my therapist